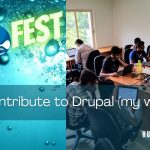 How I contribute to Drupal (my workflow)

I have been contributing to Drupal in a few different ways for a few years now. I started off by participating in meetups, and then contributing to Drupal core whenever I found time. Eventually, I was even contributing full-time courtesy of Axelerant, my employer. At the same time, I started participating in events outside my city and eventually in other countries as well. I was speaking at most of the events I attended and mentored at sprints in many of these events. I have written about this in detail before in different posts about my Drupal story and a recent update to that.

It was only with the support my wonderful family and also from Axelerant in the early years that enabled me to contribute in this way. As my responsibilities grew, I had to find focus in where to contribute. My kids were growing up and I wanted to spend a lot more time with them. At the same time, I started picking up managerial responsibilities at Axelerant and was responsible not just for my work, but for a team. I was approaching a burnout quickly and something had to go. It was at this time I rethought on how to sustainably contribute to open-source.

The story is not interesting. Honestly, I barely remember those years myself. I know they were essential for my growth and they came at a significant price. But we know that nothing worth doing is easy. As a mentor to a team and even bordering on a reporting manager, I had the privilege to multiply my efforts through them. I am proud to see how many of them have built their own profiles in the community and continue to do so.

My recommendation to my team and myself is now to stop thinking of contributing as “contribution” but as a part of our work. The word “contribution” implies giving something externally. People are hesitant to make this external action when they already are very busy with bugs, deliveries, and meetings. We all have a limited working area in mind to think about the code and all the complexity. Thinking about something external is very difficult in these circumstances.

One reason this feels so external to us is because of how we treat Drupal core and contrib. We drill in the notion in newcomers that we should never hack core. While there is a good reason for this but it results in the perception that the core (and contrib) cannot be touched. It is seen as something external and woe befall anyone who dareth touch that code. It is no surprise that many people are intimidate by the thought of contributing to the Drupal core.

The trick is to not think of it as external. I use the word “upstream” instead of contrib projects when talking about Drupal core or modules. I find that some people think of “upstream” as a little closer to themselves than “community contribution”. Thinking about it this way makes the code more real, not something which is a black box that can’t be touched. We realize that this code was written by another team consisting of people who are humans just like us. We realize that they could have made mistakes just the way we do. And we realize that we can talk to them and fix those mistakes. It is no different than working in a large team.

Yes, this means that we don’t have people who are dedicating time to contribute. That is a worthy goal for another day. I am happy with this small victory of getting people familiar with the issue queues and the contribution process on drupal.org. I have seen these small acts bubble up to create contrib modules for use in client work (where relevant). Eventually, I see them having no resistance with the idea of contribution sprints because the most difficult part of the sprint is now easy: the process. They are familiar with the issue queue and how to work with patches (now merge requests); if it is a sprint, the only new thing they are doing is coding, which is not new to them at all.

I realize that this is not a replacement to the idea of a full-time contributor. We need someone who is dedicated to an initiative or a system. These contributors are needed to support the  people who will occasionally come in to fix a bug. But we need to enable everybody to treat the core as just another piece of code across the fence and teach them how to open the gate when necessary.