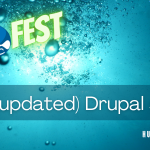 Now that I have announced my “a blog a day” DrupalFest attempt, here’s the first one. I thought for a while about what should be the first post in this series. Drupal is many things. It is a complex system used in a variety of ways ranging from small sites with few pages to rich information portals to even applications (yes, really). Then I thought of a recent tweet by webchick about Drupal’s strength and seeing most of the replies talking about community. It is easy. Drupal is many things but nothing without its community. Therefore, it makes sense my first post is about the community, or at least my story in the community.

Now, I have to be practical and write this post very quickly if I want to publish it in time (April 1st). It is less than 55 minutes to midnight here and there is a lot to write. You see, Drupal has a significant impact on my life and I can just keep on writing about it. On top of that, I even have to design a graphic to go along with this post. Maybe I will skip that.

Fortunately, it’s not the first time I am writing about my Drupal story. Go read my earlier post on this which I wrote on Drupal’s 15th birthday. This means that I only have to write about the remaining 5 years here but that is still difficult. Well, I won’t complete it if I keep talking about how difficult it is, so here goes. (Do read the earlier post before continuing.)

But what do I talk about? As I said, the impact was significant and in many areas. Do I write about how I learned a lot while contributing to the project, or how I met amazing people from all around the world who made me feel welcome and heard? Or do I write about how I was fortunate enough to travel to many countries as a part of attending Drupal events and work trips, or how Drupal was a significant factor in growing enough (professionally or personally) so that I can move to Canada? Well, let’s start with the coolest story first.

I left off just after DrupalCon Barcelona 2015 in my last post and mentioned that the next one would be DrupalCon Mumbai. You know what? DrupalCon Mumbai was amazing and not least because I won a motorbike. Not just that, I got the keys to that motorbike from Dries on stage. How cool is that?!

And the bike was a Royal Enfield Classic 350–a really cool bike with Drupal colours. It may be an entry-level Royal Enfield bike but that is still very cool.

Moving on, I was fortunate enough to speak at DrupalCon North America in New Orleans, Baltimore, Nashville, and Seattle. I couldn’t manage to get to any European DrupalCons (sometimes because of the scheduled dates and other times because of other reasons) but I did manage to go to Drupal Dev Days in Seville, Decoupled Days in New York, and DrupalCamps in London, Davos, Auckland, and other places. I was fortunate enough to travel a lot, thanks to sponsorships of Axelerant and Drupal Association. Here’s a map of my travels over the years.

In this COVID-19 era, I have realized how weird it is that I have not seen an airport in months. I am hoping that changes soon.

When I wrote my last post, I was a software engineer and an architect working mainly with Drupal. Around 2017, I took on management responsibilities and began my arduous journey into the realm of human behaviours and management. It was a tough ride and I am still learning to be a better manager and a better leader. If not for the opportunities afforded me by Drupal, I probably wouldn’t have taken this path. A big shout-out to everyone at Axelerant to put their trust in me and letting me have such a significant impact on their lives. I wrote more about this in a (now dated) post on my other blog.

Since I wrote that post, I am now promoted to Director of PHP and Drupal Services at Axelerant and find myself thinking about how I can help people obtain the same set of opportunities that I did. Drupal makes a lot of that very easy, of course.

Honestly, this is a bit scattered and I will only list things I can remember off-hand and in no particular order. Apart from learning more about Drupal and its ecosystem, I have started to explore the larger technology ecosystem in areas such as DevOps, machine learning, automation, and so on. On the Drupal front, the contrib tracker I wrote as part of a hackathon at Axelerant is now in use full-time and we are improving it slowly. I also started maintaining a few modules such as preloader and others but I have not had the opportunity to do a lot with them in the last year or so.

For work, but also for general use, I published tools such as axl-template and db-docker to help with Drupal related tasks (more details at the links). I also maintain a couple of Docker images specific to Drupal use cases. The first one, drupalqa, helps with Drupal QA related tasks such as code sniffing and static analysis. The other image, drupal-base, can be used to run Drupal websites (we use it in CI environments for tests). Again, more details at the links.

I feel like I can keep writing about this but it is less than 15 minutes to midnight and I am going to end this here. Tomorrow will be a different topic. Thank you for reading until the end!