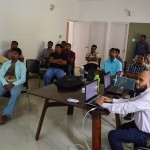 This September saw two Drupal meetups being held in Bangalore. Drupal Minicamp was organized last week which received a tremendous response. Today’s Drupal meetup, similarly, saw an excellent participation level. I arrived to find the room mostly full and only a couple of empty chairs. Before long, we had to get more chairs to seat all the arrivals.

As is custom for this monthly meetup, it is held on premises of Azri Solutions in Koramangala, Bangalore. The agenda for the meetup included a discussion of Symfony and Symfony CMF by Allabaksh and introduction to contributing to Drupal community by Hussain (that’s me!) The talk on Drupal contribution was scheduled just a day before as the original speakers faced emergencies and could not make it to the meetup. It was to be based on a blog post I wrote some time back on the same topic. Continued after photos…

The meetup started with a discussion of Symfony by Allabaksh. I arrived only at the end of the talk and could only participate in the discussion of Symfony, CMF and it’s relevance to Drupal 8. After this, various members stepped up to demo the sites they have built using Drupal with a focus on site building. This was unplanned, but still there were a good number of participants who demoed different sites they built, explained how they were built and answered any questions. This was followed by a small tea break, courtesy of Azri Solutions.

I started with my talk on Drupal contribution after the tea break, and given that I had no preparation (due to my inconsistent health), I was not sure how far I’d be able to go. The audience was very supportive and that helped me to talk about various aspects of contribution – not just code, for over an hour. Given that we had already overflown the time, I was not able to give a more hands-on demo for certain aspects of code contribution. That will hopefully be covered in the next month’s meetup which, based on participants’ response, will include a hands-on and mentoring session to contribute to Drupal issue queues.

The meetup ended at 1:30PM with a group photo. More photos are uploaded to the Flickr album and also embedded above in this blog post.