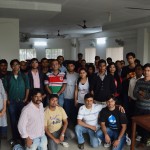 Bangalore has a decent community around Drupal and while the meetups and camps are not regular, they happen from time to time and see decent participation. Last week’s Drupal Minicamp (21st Sep, 2013) was a great success, witnessing almost full participation and five amazing talks and presentations. This was organized by Tanay and hosted by KNS Technologies (they also hosted the Drupal training day last December).

Photos are available in a Flickr album and also embedded below. An account of various sessions follows right after. 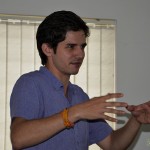 The mini-camp started at 10AM with keynote by Jacob Singh, Regional Director, India of Acquia. The keynote addressed innovation in an open source project. The 30-minute talk covered how open source drives collaboration in order to build a community, which fosters innovation. Using an example of Drupal module for pinterest, Jacob contrasted the innovation drive in comparison to a proprietary software cycle. 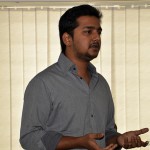 This was followed by a demo of a Drupal based, social network / blogging site called Campus Diaries. Raj Chourasia discussed how he started building the site and formed a content ecosystem around it. The audience was impressed at the level of customization while Raj claimed that only about 10% of the site had been custom coded. The rest is stock Drupal with contributed modules. To this end, Raj discussed various best practices, tips and gotchas for site building and listed various modules he used for the job. 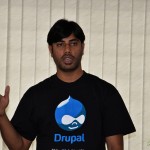 This was followed by an introduction to Drupal multi-site setup which also included a demo of building one. Karthik took the audience through a detailed step-by-step live demo of setting up a multi-site setup and configuring it to share (or separate) modules, themes, etc… Lunch break was called after this at 12:45PM. 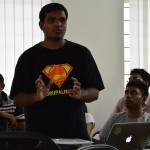 After lunch, Medhamsh introduced the participants to DevOps practices and it’s relevance to modern software development. He also covered how these practices can be used in context of Drupal development. This included a live demo of various tools built for purpose of managing development, test and production environments of a Drupal project using an integrated solution and workflow tracker. 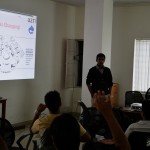 This was followed by a session on integrating Drupal with moodle by Charan. Moodle is a learning management solution and it’s integration with Drupal like most other systems, offers SSO along with other benefits.

The mini-camp ended roughly at 4 PM. Most of the participants stayed on to meet and network. As is tradition, the event ended with a group photograph. 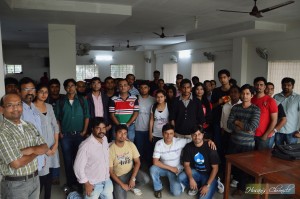 All in all, a great event and a spectacular success. Kudos to Tanay for organizing this and our host – KNS Technologies for their excellent arrangements.