How I contribute to Drupal (my workflow) Altering forms in Drupal: a workable mixed approach 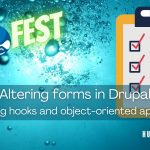 Update: Read the follow-up to this post where I discuss a mixed approach combining both of the approaches here.

I previously wrote about how the object-oriented style of programming can be seen as a solution to all programming problems. There is a saying: if all you have is a hammer, everything looks like a nail. It is not a stretch to say that object-oriented programming is the hammer in this adage. That post was quite abstract and today I want to share a more specific example of what I mean. More specifically, I’ll talk about how using “objects” to alter forms without thinking it through can cause harm.

But first some context: this example comes from my reviews every week of code submitted as part of our interview test. This has happened frequently enough that I think that this is actually a recommendation somewhere. Even if it is the case of people copying each other’s work, it certainly is evidence that this has not been thought out. In fact, this makes for a good interview question: where would this method fail? I am going to answer that in this post.

Let’s look at the traditional method first. Drupal provides hooks to intercept certain actions and events. For example, Drupal might fire hooks in two situations: in response to events like saving a node, or to collect information about something (e.g. hook_help). You will find a lot more examples about the latter and that is what we are going to talk about today.

Drupal fires a few different hooks when a form is built. Specifically, it gives the opportunity to all the enabled modules to alter the form in any way. It does this via a hook_form_alter hook and a specifically named hook_form_FORM_ID_alter. So, for example, to alter a system site information form, either of the functions below would work:

Adding elements or altering the form elements in any way is a simple affair. Just edit the $form array as you want and you can see the changes (with cache clear, of course). This is the old-school method and it still works as of Drupal 9.

More often than not, I see the form being altered in a much more involved way. Broadly, this is how it looks:

This gist contains the entire relevant portion of code.

After doing all this, you might expect that the code should at least work as expected. Many people do. But if you have been paying close attention, you might see the problem. If not, think about what would happen if two modules attempt to alter the same form this way. Only one of them would win out.

If there are two modules altering the same route, the last one to run will win and that module’s form changes will be used, The form controllers from the previous modules will never be executed. You could extend the first module’s form controller in the second module (so that changes from both modules take effect) but that is not reasonable to expect in the real world with varied combinations of modules.

So, we shouldn’t use objects?

I am not saying that. I am saying that we should think how we are applying any programming paradigm to build a solution and where it might fail. In our example, if Drupal supported an object-oriented version of form alters, that would have been safe to use (there is an open issue about this.) In fact, there is discussion to use Symfony forms and also some attempts in contrib space. Until one of those solutions get implemented, the form_alter hook is the best way to alter forms. And there is a good chance that such hooks get replaced in time. After all, the event-based hooks did get replaced by events in most cases.

For now, and always, use the solution that fits your needs. Using objects or using functional programming doesn’t necessarily make a program better. It is using our skills and our judgement that makes a program better.

Update: Read the follow-up to this post where I discuss a mixed approach combining both of the approaches here.