What does a Drupal developer do? Tracking Drupal (and open source) contributions 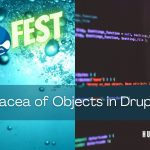 The Panacea of Objects in Drupal

Drupal 8 was a major revolution for the Drupal community in many ways, not least of which was because of the complete rearchitecting of the codebase. We picked up the modernization of various frameworks and tools in the PHP community and applied it to Drupal. Of course, this makes complete sense because Drupal is written with PHP. One of the things we picked up was the PHP’s shift to the object-oriented programming approach.

The shift to using objects enabled us to collaborate with the rest of the PHP community like never before. On the language front, we had PHP-FIG working on standards such as PSR-4 which was adopted by many libraries. And on the tooling front, we had composer which allows us to use other packages with minimal effort. These developments made it possible for us to build Drupal on top of the work from the larger PHP community. However, this meant that we had to follow the same style of programming as those libraries and thus began a massive re-architecture effort within Drupal.

Drupal is a product built and maintained by a diverse group of geographically distributed and mostly unpaid people. Further, Drupal’s value is not in just the core system, but also the tens of thousands of modules, themes, and distributions maintained by a similar group of people. All the modules, themes, and distributions depend on the core Drupal’s API which means that making any change to the core is very risky.

Because of this, it is simply not possible to isolate Drupal and refactor. We had to incrementally refactor parts of Drupal while making sure there is sufficient documentation for people to upgrade their modules. This inadvertently, but predictably led to significant overengineering in Drupal’s codebase. There are a lot of parts of Drupal several layers down which may seem messy but there is a reason. The problem is that those reasons are very hard to surface. More importantly, they become a hurdle for more core contributors to simplify the system.

The new structure has brought in dozens of new practices (such as the DIC). This often means that you need to augment the structure to support that. Soon, we have classes with multiple adjectives and nouns everywhere reminiscent of Java. This makes the code even more opaque putting in more hurdles for people who are new to Drupal. Even experienced PHP developers may find trouble navigating the sometimes unintuitive names of various components because of the historical context.

With people managing to work in this new reality, I have found that people’s answer to all problems is simply more objects. Copy-paste solutions from various places (aka StackOverflow) and make it work. At work, I have seen more and more code samples from people who are convinced they are presenting a superior solution simply because they are using classes with names like subscriber and controller while not realising they are breaking functionality that would not have broken in Drupal 7.

This may seem vague at this point and I hope to present more specific examples in future posts. I will leave you with these abstract thoughts for today. I hope you found this interesting even if not useful.