The magic of Drupal events Drupal Podcasts (and some PHP ones) 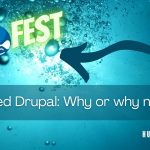 Today’s post is going to be a quick one; not because it is an easy topic but because a lot has been said about it already. Today, I want to share my thoughts on decoupling Drupal; thoughts that are mainly a mix of borrowed thoughts from several places. I will try to link where I can but I can’t separate my thoughts from borrowed ones now. Anyway, by the end of the post, you might have read a lot of things you already knew and hopefully, one or two new things about Decoupling Drupal.

Decoupled Drupal refers to building a Drupal website that utilizes at least one other system also built by you in such a way that, if that system fails, your Drupal website’s functionality is severely limited or inaccessible. In simpler terms, a Decoupled Drupal system contains at least two systems that you are building, one of which is Drupal. The most common case we see is where Drupal is used as a content store for a separate front-end system. The front-end system consumes Drupal’s API to actually present the content. There are many other combinations possible as well. You could have another content store and use Drupal as the front-end. Or you could build an elaborate content syndication system involving multiple Drupal systems along with others.

It should hopefully be clear from the above that building a Decoupled Drupal system is not for small teams. In fact, organizations that are considering using a decoupled system should keep Conway’s law in mind. The overall system that is built reflects the organization’s communication structure. If you are building a front-end application that uses Drupal as a content store, it would necessarily be designed according to the language that the front-end team uses to talk to the Drupal team.

The issue at hand is more subtle than is apparent. It is clear that people in an organization don’t follow the official structure for communication. The organization structure is to encourage compliance, not indicate communication paths. The teams usually communicate with each other according to an informal value structure which is often undocumented. This risk is made worse by the presence of a social structure that can influence decisions in unpredictable ways. Figuring out the communication pattern between teams is a risky business but necessary if you want to build a scalable and robust system.

Why you shouldn’t decouple Drupal?

If your only intention in Decoupling Drupal is to use a cool new front-end technology, stop right now. You will lose a lot more in value than you might get in bragging rights. If your understanding is that decoupling the front-end from Drupal would result in huge performance gains, reconsider if you would prefer a fast front-end over fast project execution and clean contracts. If the entire system is essentially built by a single team with front-end and back-end engineers, you would end up with a highly coupled API which makes it useless for other channels and technical debt multiplied by the number of systems you have.

Remember Conway’s law here. Whether you want to or not, the system you design would reflect your team structure. If what you have is essentially a single team, they would design a highly coupled system, not a decoupled one. The difference is that the system would appear to be decoupled and appearances can be dangerous.

Why you should decouple Drupal?

Let’s look at Conway’s law again. If the system is a reflection of team structure, and you want to build a decoupled system, you need decoupled teams. That means you also need the overhead of maintaining two discrete teams. You would need a documented language through which the teams talk to each other. And this language can’t be the internal language used within the team. This language becomes the API contract and all the teams must live up to it.

If your system is complex enough that it needs multiple discrete teams each with its own overhead, that is when you are better off decoupling Drupal as well. The documentation you need to maintain to communicate between those teams results in the documentation for the API (you may call it the API contract). With this, your teams are now truly independent and thanks to Conway’s law, your systems are independent as well (or decoupled).

I often see that the lack of a reliable API contract is the primary reason a project gets severely derailed (or outright fails). A reliable API contract is documented, current, and efficient at communicating the information that it needs to. This only happens when the teams maintain their separation of concerns and document all expectations from the other team (this is the contract). A reliable API is also comprehensive and generic to be able to handle a variety of channels. In other words, a reliable API encourages the separation of concerns.

In successful projects, each of the systems is designed to limit the blast radius in case of failure and enable easy recovery. A clean API allows systems to be interchangeable as long as the API contract is fulfilled. Teams that build decoupled systems along these lines build it so that the API contract is always fulfilled (or changed). And this process leads to independent teams and systems that work well.