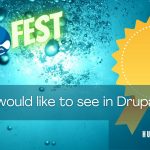 I picked up this topic from my ideas list for this #DrupalFest series of posts. I didn’t think I would want to write about this because I don’t think about features that way. One of the strengths of Drupal is its modular architecture and I can put in any feature I want from the contrib space. In fact, I prefer that, but that’s a different topic. I am going to write this very short post anyway because I am now thinking about this from a different point of view.

To write this post, I thought about the various things that bother me in my day-to-day work. I thought of how we could have simpler dependency injection, or lesser (or clearer) hooks, or lesser boilerplate, but then I realized that all of those don’t matter to me very much right now. Those can be improved but they are inconveniences and I can get over them.

Easier testability is what I want from the future versions of Drupal. I have realized that the ease of testability is the strongest indicator of code quality. A system that is easily testable is implicitly modular along the right boundaries. It has to be, otherwise, it is not easy to test. A good test suite comprises of unit tests, integration tests, and feature tests. If it is easy to write unit tests, then the system is composed of components that can be easily reused (à la SOLID principles). Integration and feature tests are easier to write but eventually, they get harder unless the system is built well.

Now, Drupal is one of the most well-tested pieces of code out there. Each patch and every commit is accepted only after it passes tens of thousands of tests. Testing is also a formal gate in adding new features (and some bugfixes). That is to say, any new feature needs to have tests before it can be merged into Drupal core. Consequently, testing is common and core contributors are skilled in writing these tests.

This testability is not easily carried forward to most kinds of websites we build using Drupal. Building a typical Drupal website is mostly a site-building job and cross-connecting various elements. This happens either by configuring the site via UI or by using hooks which are essentially magically named functions that react to certain events. With Drupal 8, the hooks-based style of writing custom modules has changed significantly with modern replacements but principally the same. This style of code where you have multiple functions reacting to events and altering small pieces of data is very difficult to unit test. This means that the only possible useful tests are feature tests (or end-to-end tests). Unfortunately, these tests are expensive to run and failures do not always point to an isolated unit.

There have been several attempts to make writing tests easier generally and for Drupal. The package that stands out to me for this is drupal-test-traits. This package provides traits and base classes that make it easy to test sites with content. You would set the configuration to point to an installed site and run the tests. The traits provide methods to create common entities and work with them and the tear-down handlers will clean those entities up at the end. All you have to worry about is providing an installed site.

In fact, the common problem with testing Drupal is testing an installed site. Most Drupal sites I have worked with are not easy to install, despite best efforts. Over time, you need to rely on the database to get a working copy of the site. This is true even if you follow the perfect configuration workflow. It is very common to have certain content required to run a site (common block content, terms, etc) and configuration workflows cannot restore such content. There are other solutions to these problems but they are not worth the pain to maintain. We’ll not go into that here.

Handling the database and assets

Sharing databases turns out to be the simplest way to create copies of a site which shifts the problem to making such databases available to the testing environment (e.g., CI jobs). If you are running a visual regression test, you would also need other assets such as images referenced in blocks and so on. At least for the database, we have prepared a solution involving Docker and implemented as a composer plugin. Read more about it at axelerant/db-docker. This plugin makes it easy for the team to manage the database changes as a Docker image which can be used by the CI job (or another team member).

Handling assets is a more complicated problem. We traditionally solved this with stage_file_proxy and I am planning to work on this more to build a seamless workflow like we did for databases. Any ideas and suggestions are very welcome. :)

Drupal has long been said to be a solution to build “ambitious digital experiences”. Such systems are built by teams and any team needs a workflow on which everyone is aligned (otherwise it wouldn’t be a team). We have seen many improvements in various aspects of Drupal over time that cater to a team workflow (configuration management comes to mind clearly). In my humble opinion, I feel standard workflows for improving testing should be a priority now.

I will leave my post here as it is already much longer than I intended. I know I didn’t present any comprehensive solutions and that’s because I don’t have one. My interest was in sharing the problem here. There are only pieces of the solution here and I am interested in finding the gel that brings them together.