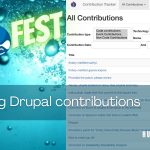 We at Axelerant have been contributing to Drupal in our own ways for a long time. In fact, I worked as a full-time contributor to Drupal a few months after I joined. This was around the time Drupal 8 was almost done and it is thanks to Axelerant I could contribute what I could at that time. At the same time, there was community focus around incentivizing contributions and there were a few websites (like drupalcores) to track contributions.

Sometime later, in one of our internal hackathons, I built a basic mechanism to track contributions by our team (you can see it at contrib.axelerant.com). It was a weekend hackathon and what we built was very basic but it set the groundwork for future work. We adopted it internally and reached a stage where we had processes around it (even our KPI’s for a while). In this time, we expanded the functionality to (manually) track non-code contributions. More recently, we added support to track contributions from Github as well.

Since this was a hackathon demonstrating possibilities using code and technology, we started with only tracking code contributions. Soon, we expanded this to track contributions to events and other non-code means. The latter was manual but this helped us build a central place where we could document all our contributions to the open-source world.

Now, we have a process for anyone joining Axelerant to set up an account on the contrib tracker. After this, all their contributions to Drupal and Github begin to get tracked at that time. We also remind people frequently to add details of any event they have attended.

Contrib Tracker is open source but currently treated as an internal project at Axelerant. We initially set it up as a public repository on our Gitlab server. Now we realize that it was not practical for people to access and help build it. Today, I moved Contrib Tracker to its new location on Github: contrib-tracker/backend. For a while, we had the thought of implementing the website as a decoupled service and that’s why the repository is named “backend”. Right now, we may or may not go that route. If you have an opinion, please do let me know in the comments.

The move to Github is still in progress. In fact, it just got started. The project is, right now, bespoke to how we host it and one of the lower priority items would be to decouple that. Once that is done, it should be possible for anyone to host their own instance of contrib tracker. But the more important task now is to move the CI and other assets to Github. I will be creating an issue to track this work. Our team at Axelerant has already started moving the CI definitions.

That’s it for today. Do check out the source code at contrib-tracker/backend and let us know there how we can improve it, or better yet, submit a PR. :)