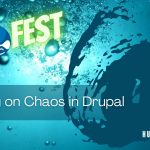 Thriving on Chaos in Drupal

Today, I want to share my thoughts from a book passage related to Drupal. The book, Everyday Chaos by David Weinberger, is largely about how chaos is the new reality in today’s machine-learning-driven world. In this book, Drupal is discussed in the chapter on strategy and possibility where it is contrasted with more traditional methods of product development and organizational vision. The book is amazing and insightful, and the section on Drupal was a welcome surprise.

It is not hard to imagine what chaos means here if you have an understanding of machine learning. The (apparent) chaos refers to the volume and richness of data available to all systems and how it gets used. Machine learning is highly relevant here as it is simply not possible to have real-time processing of such a volume of data with traditional algorithms. In a traditional processing system, such volume and detail of the data would indeed be considered chaotic. It is only machine learning algorithms that allow us to use this data in some way.

But this post is not about machine learning. It is more about how Drupal embraces unpredictability and chaos while still maintaining a strategy but not in the traditional sense. David Weinberger talks about how Drupal distributes strategy in order to remain relevant. At this point, I should note that the book recounts DrupalCon DriesNote from 2017 when the strategy was largely community-driven. Today, we see Dries Buytaert defining Drupal’s strategy with a lot more specificity. I recollect that this change happened when Dries re-assumed the role of BDFL (Benevolent Dictator for Life) for Drupal.

Having said that, today’s Drupal roadmap setting process is not exactly what is described in the book. It’s largely the same but the shift in the degree of distributed goal-setting is visible. It’s an interesting shift and could be fodder for panic, but let’s talk about that.

There is a line in the passage I absolutely love.

The Drupal ecosystem is one of abundance.

Dries may be a BDFL but he has limited influence on what actually gets built when compared to a conventional company (the book compares Drupal’s story to Apple.) And the book goes on to explain why it works. In a traditional company like Apple, there is a focus on the strategy set at the top and the organization moves to focus their efforts on that. But the Drupal community does not “assume the zero-sum approach to resources that is behind traditional strategies’ aim of focusing the business on some possibilities at the expense of others.” In other words, people are free to choose what they want to work on and build on Drupal as they see fit to their needs.

But that doesn’t necessarily imply abundance. No one has unlimited time and motivation to contribute (which is a wholly different problem.) This brings us to the next section.

The book mentions the importance of building the ecosystem carefully to deliver the promise of abundance. The book calls it ecosystem but we know it as the Drupal community. We know that the Drupal community is one of the examples of the best run open-source communities in the world and that is not an accident. Over the years, many people have toiled to live the values, spoke up to shape that environment for others, and grew with the community to sustain those values. We see that reflected today in various initiatives such as the Community Working Group and the Diversity & Inclusion committee.

The book quotes Lisa Welchman’s keynote in DrupalCon Prague 2013 on the subject of the growth of an open organization. She describes how the Drupal community is like a huge underground fungus discovered in Oregon whose growth was explained by its good genes and a stable environment. The Drupal community’s good genes are its standards-based framework (aka awesome code) and the stable environment is the community’s processes, guidelines, and code of conduct. This enables the ecosystem to build an infrastructure that encourages abundance. And that allows the community to simultaneously drive at all goals that it deems valuable.

In other words, the Drupal community is awesome at building Drupal. And you come for that code and stay for that community.