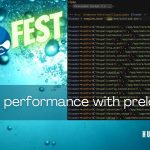 PHP 7.4 introduced the concept of preloading classes (files) on server start-up into the PHP opcache. This gives us performance benefits for sites that tend to load a lot of files with every request; something that Drupal is known to do. A properly configured web server would have opcache (opcode cache) enabled anyway, but preloading brings in a modest performance boost on top of that.

PHP opcache is designed to cache the opcodes of a PHP file so that the file does not have to be reinterpreted with every request. The bytecode (opcode) is cached in shared memory in RAM which means that the cache lives only as long as the PHP process is running. When the opcache is enabled, PHP caches whichever files are loaded during execution and only recompiles the file if it has changed (this setting can be disabled for an additional performance boost).

Preloading works in a similar way except that you would write a script that would load the files you want to cache. This script is set to PHP’s opcache.preload setting which executes this script every time the server starts. Since this script is run with the server, you have to make sure that any errors are handled properly; otherwise, the server would throw an error and quit. Now, you may want this script to load all the files in your application, but the opcache memory size is limited. This means that you should only preload files that are required by most requests. In many PHP applications, these files may even be hand-written to get the best ratio of memory usage and throughput.

Now that we understand how preloading works, let’s see how it can be used with Drupal. Writing the preload script by hand is difficult as Drupal is a dynamic system. Even if you write a preload script for all the Drupal core files, it may be your contrib modules that are a better fit for this. This is the reason I have written a Drupal module called preloader to make this easy for you.

The module uses a PHP package called darkghosthunter/preloader which does most of the heavy lifting. The package checks the current opcache usage and generates the preload script. The Drupal module brings in Drupal-specific customization (removing files that shouldn’t be preloaded) and a user interface to generate the file. You still have to manually add the preload script to your PHP settings for the changes to take effect. Still, the difficult task of generating the script file listing all the important files is made easy for you.

The workflow is as follows:

Since the preload script is executed at the server start and the cache is permanent as long as the process is running, if you change any of the preloaded files, you have to restart the server. For this reason, it is not a good idea to use this functionality during development. The module may remain enabled but the opcache.preload setting should not be set on the developer machines.

In my early tests, I saw an average of 10% improvement with preloading enabled across different percentiles. This test is quite old and I should repeat this on a better machine but the result should still be indicative. Hopefully, I will be able to test this module again this month and even work on some of the issues that have been reported. I will share screenshots or even a video of the test when possible.

This is it for today’s DrupalFest post. See you tomorrow, hopefully.