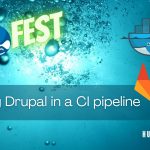 Here’s a quick post to show how we can run Drupal in a CI environment easily so that we can test the site. Regardless of how you choose to run the tests (e.g. PHPUnit, Behat, etc), you still need to run the site somewhere. It is not a great idea to test on an actual environment (unless it is isolated and designated for testing). You need to set up a temporary environment just for the CI pipeline where you run the tests and then tear it down.

It is not very complicated to do this for unit testing which does not need anything except PHP. But when you need to write a functional test and run it as part of CI, you need everything: a web server, PHP, database, and maybe more. Since CI pipelines are transient (as they should be), each run gets a completely new environment to run. This means that you have to somehow set up the environment for testing.

Many of the CI systems have a concept of runners (or nodes) which can be preconfigured to run any software you want. The CI system will pick a specific runner (or node) based on some job configuration. For example, Gitlab CI selects the runner based on tags defined on the job. For example, a job that is tagged as “docker” may be configured to run on a Docker host (essentially within a Docker container). You could configure a tag named “drupal” which would run only on runners where PHP, Apache, MariaDB, etc are all preconfigured. Your job just needs to load a database and run the tests.

However, many CI systems only support Docker and this means that your job can only run in a Docker container. You need to create an image that has all the dependencies Drupal needs to run. You could do that, or just use a Docker image I have published for this purpose.

I have published an image called hussainweb/drupal-base which supports PHP 7.3, 7.4, and 8.0. The images are tagged respectively as “php7.3”, “php7.4”, and “php8.0”. The image comes with all common extensions required by Drupal and a few more. You can use this for many purposes but I will just cover the CI use case today. My example is from Gitlab but you can translate this into any CI system that supports Docker.

Ignore the “services” part for now. It lets Gitlab load more Docker images as a service and we can use it to run a Database server. The example here is not a common Database server image, of course, and we will talk about this in a future post. Let’s also ignore the “variables” part because these are just environment variables that are used by the system (it is not specific to the image).

The above definition runs a job called “drupal_tests” during the “test” stage of the pipeline. It loads the PHP 7.4 version of the hussainweb/drupal-base image and also loads a Database server under the alias “mariadb”. Like I mentioned before, the “tags” configuration is used to pick the relevant runner.

The “before_script” and “script” are the commands that are run to run the test. We run some common setup in “before_script” to set up the settings.php with the database host details. We also set the document root for Apache to match Gitlab runners. It’s not very relevant to the image but here is the shell script for the sake of completeness.

The actual test execution happens in the “script” section. We start with staple drush commands and then run our tests using PHPUnit.

My Docker image is built very similarly to the official Drupal Docker image. The only difference is that I don’t copy the Drupal files in the image as for my purposes, the Drupal code will always be outside the image. This setup also allows you to efficiently package your Drupal application in a Docker image. Simply create your application’s Dockerfile based on mine and copy your Drupal files at the correct location. But that’s not the subject of our post. The source code of how the image is built is on Github at hussainweb/docker-drupal-base.

I’ll end it here today and I hope you find this post useful. Do let me know in what other ways you might find this image useful.