Simple Infrastructure as Code (IaC) for Drupal People in Drupal 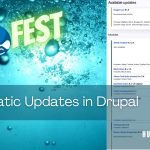 My thoughts on Automatic Updates in Drupal

It’s spring and I decided to come out to a park to work and write today’s post. I sat on a bench and logged in to my WordPress site to start writing the post when I noticed that one of the plugins had updates available. I didn’t have to think about this and straightaway hit the update button. Less than 30 seconds later, the plugin was updated, the red bubble had disappeared, and I had my idea of today’s post. That is why I want to talk about automatic updates on Drupal today.

Now, automatic updates have been in WordPress for quite some time. In fact, I don’t remember when I last updated a WordPress site manually even though I am running this site for years. The closest thing to this we have in Drupal is the “Install new module” functionality. As the name says, it can only be used for installing a new module and not updating existing ones. There is an initiative for Drupal 10 to bring automatic updates to Drupal core (only security releases and patch upgrades for now).

It may seem strange that we don’t have automatic updates in a product aspiring to be consumer-grade in this age. The reason is that this problem is hard to get right and notoriously dangerous if it goes wrong. Also, Drupal is used on some of the largest and most sensitive websites in the industry. The environments where these websites are hosted do not support any regular means of applying updates. Finally, Drupal tends to be used by medium to large teams who use automation in their development workflow. The teams would rightly prefer the automation in their toolchain to keep their software updated.

For example, at Axelerant we use Renovate for setting up our automatic updates for all dependencies (even npm and more). In fact, our quick-start tool comes with a configuration file for Renovate. With our CI and automation culture, we would not like Drupal to update itself without going through our tests.

This is not applicable for most users of Drupal and having some support for automatic updates is important. But considering the challenges in getting it right and lack of incentives for heavy users of Drupal, this feature was not prioritized. It’s about time that there is community focus on it now.

The current scope of the automatic updates initiative is listed on its landing page. The current scope is limited to supporting only patch releases and security updates only for Drupal core, not even contrib modules. While this is far from making Drupal site maintenance hands-off, it is a step in the right direction. Of course, once this works well for Drupal core, it would be easy to bring it to contrib projects as well. More importantly, it would be safer as any problems would be easier to find with a smaller impact surface area.

In my mind, these are the things that the automatic updates will have to consider or deal with. It’s important for me to note that I am not involved in the effort. I am sure the contributors to this initiative have already considered and planned for these issues and maybe a lot more. My intention is to portray the complexity of getting this right.

This is one of the most critical factors in an automatic update system. Internet is a scary place and you can’t trust anyone. So, how can a website trust a file that it downloads from the Internet and then replace itself with its contents? This is the less tricky part and it can be solved reasonably well with a combination of certificates and file checksums.

The website software runs as a user on the server, ideally, with a user with just enough privileges. In most cases, such users don’t have permissions to write to their own directory. This is needed because if somebody is able to perform a remote code exploit, they could write to the location where the software is installed and install backdoors. But in such a configuration, the website cannot write to its own location either. I don’t think such setups are in the scope of automatic updates anyway, as such teams would have their own automation toolchain for keeping software updated.

As I mentioned before, Drupal websites are typically built by large teams who have automation set up. Such teams typically have their own conventions as to how upgrades are committed and tested. This is why tools such as Renovate can get so complicated. There are a lot of conventions for automatic updates system to deal with and as far as I know, most just ignore it. For example, I don’t know if WordPress really cares about the git repository at all.

Once the updates are downloaded, they still have to be extracted and placed in their correct locations. What if, due to a permission error, a certain file cannot be overwritten? Such issues can leave the website in an unusable state entirely. The automatic updates code should be able to check for such issues before beginning the operation. There’s still a chance that there would be an error and the code should be able to recover from that. I’m sure there are a lot more scenarios here than what I am imagining.

This is a wider problem than just Drupal and we don’t have to come up with all the answers. There is an ongoing effort to address these problems generally in a framework called The Update Framework. More about this is being discussed in the contrib module automatic_updates and the plan is to bring this into the core when ready. Follow the module’s issue queue or the #autoupdates channel on Drupal Slack.