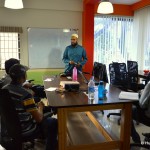 I missed writing about June’s meetup as I have been so busy. The Drupal Meetup in Bangalore has moved to a new address – Bangalore Alpha Lab, JP Nagar, and the meetup in June saw a very nice turnout. Gokul started off the meetup with a session titled ‘Drupal in 90 minutes’ which saw participants build a college website with functionality for staff and students, and was a great success. After this, I spoke about Dependency Injection and services in Drupal 8.

The July edition of the meetup was rescheduled to a week later and hence it fell in the first week of August. The turnout was poorer than expected but we had a great discussion on various topics like application of Drupal and other open source technologies in real world projects, diagnosing problems, finding modules, etc… Chakrapani explained theming in Drupal 7 after which I spoke a bit about PHP-FIG and various PSR’s. This was followed by a small question/answer round.

We are working to make each meetup better than before and build the PHP and Drupal community in Bangalore and around. We welcome speakers and participants for a wide range of topics on PHP, Drupal, Web Development, Project Management, etc… Join us on meetup to stay in touch and get updates on various events. Please share this and help make the Bangalore Drupal community awesome.