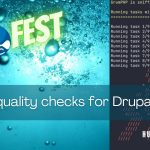 This is the fourth post in my DrupalFest series and I am excited to keep it going. I want to write about different tools I am aware of for running quality checks on Drupal code. This will be somewhat similar to my last post where I presented various options but focused on the method I use nowadays.

First of all, what am I talking about? I believe that the code we write is read a lot more times than it is written. It is read by other people than yourselves (2-week older you is another person) and they (you) have to understand what is written. Therefore, code must be optimized for readability. Performant code is a must, of course, but not at the expense of readability. When your best-performing code breaks and you can’t understand it to fix it, that performance is useless.

One of the low hanging fruits here is following a consistent code style. Drupal documents its coding style in detail and the Drupal core and contributed modules (most of them anyway) follow it. True, it’s not like PSR-2 or PSR-12; it was developed long before there were PSR’s, but if you are working with Drupal, it will be a good idea to follow this coding style consistently. Now, you could manually review each and every line of your code to make sure you are following the code style and halt your pull requests, but that is not a good use of your time. Hence, tools.

Apart from the coding style, there are ways to prove “correctness” of your code. Broadly speaking, there are two aspects of correctness–the code is coherent and the business logic is correct. The coherent code aspect can be checked using various static analysis tools; PHPStan and Psalm are few of the popular ones. For verifying the business logic, we write automated tests and PHPUnit is the defacto standard for that.

Before we get into the Drupal site of things, I’ll list the various tools that we use. I won’t attempt to document them here (in the interest of time) but you shouldn’t have trouble finding their documentation.

Almost all of these tools can be installed via composer or PHAR files. Composer is an easy way to get these tools but they end up affecting your project dependencies. PHAR files have to be installed on your machine (and everyone in the team should do that too). In both of these methods, you still have to remember to run the tools. That is where the next set of tools come in.

One of the ways to make sure everyone on the team adheres to the checks is by running the test in CI. This way, the team would immediately know if their commit is failing checks without even someone having to say so in a pull request. You could again choose to have all of these tools in your composer.json and install them while running your CI, but there is a better way for most cases. DrupalQA is a Docker image which packages almost all of the above tools and you can just run the commands you want within the Docker container. Almost all modern CI tools provide some way of running tests inside a container and you should find documentation to do that for your CI tool. Here is an example of a Gitlab CI job definition which uses the PHP 7.4 version of this image.

You could even run the Docker image locally but that’s more trouble than it’s worth. There is a better way in any case.

Have your team run checks automatically

The CI is fine to run these tests but what if you want to save time between commit, push, and CI runs. Wouldn’t it be better for developers to run these checks on their machines before they commit their code. GrumPHP is a tool which allows you to do just that. Vijay CS has written a wrapper on GrumPHP that provides default configuration for checks related to Drupal. While this is great for general use cases, I wanted to make a highly opinionated one for my team at Axelerant. While it is opinionated, it is still available for use and you would just install it using composer this way:

After this, anyone using your project would automatically get git hooks installed (once they run composer install) to run a few Drupal-specific checks every time they commit. You can modify the default configuration and add/remove any tools you wish. Just follow GrumPHP documentation for the same. Of course, more documentation is also available at the Github page for axelerant/drupal-quality-checker.

GrumPHP recently made a lighter package available called GrumPHP Shim. This provides the same set of features but installs a PHAR file instead of a regular composer plugin. This has the benefit of keeping your project dependencies free of GrumPHP’s dependencies reducing the chances of conflict. Axelerant’s version of drupal-quality-checker uses the shim for this reason.

I think I covered all the tools I am aware of and could recollect in the span of couple of hours today. I’m sure there are more tools that are missing here but I am going to call this DrupalFest post done for now. If I am missing something obvious (or even niche), please point it out in the comments so that I can revise or write about it in a separate post.