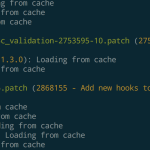 The problem is simple: Patches are not applied even though you might see it in the composer log output. In fact, even a PATCHES.txt file is generated with the correct listing of patches. There are no errors and no indication that the patching failed for any reason. The problem is because git apply fails silently. It does not give any output nor sets an error exit code.

The problem was first documented and fixed in cweagans/composer-patches#165; however, the fix used there relies on git-apply outputting log messages saying patches were skipped. Unfortunately, that behavior was only introduced in 2.9.0. The Docker image I was using only contained version 2.1.4. All I needed was either these “Skipped patch” messages or an exit code and the plugin would fall back on patch command, but neither happened.

Also, this is actually supposed to be git behavior: git apply will fail to do anything when used within a local checkout of a git repository (other than the one for the project the patch is made for), such as if you are patching a module that is within a site that is in Git version control. The suggestion is to use patch -p1 < path/file.patch instead. While an obvious solution was to upgrade git, a simple Google search told me that this problem has happened to others and I decided to dig deeper. All variations of git apply simply didn't work, nor would set the exit code. I followed the debugging steps in one of the comments in the pull request, but I still wouldn’t see any messages similar to “Skipped patch” or applying patch, or any error.

In testing, I found a way to get it working with the ‘--directory‘ parameter to ‘git apply‘. The command executed by the plugin is similar to the following:

Instead, this command worked (even if there is no git repository involved at all, even in the current directory):

On digging a bit more, I found another workaround that worked for me in cweagans/composer-patches#175. What’s more, this was already merged and tagged. All I had to do was update to the latest version 1.6.4 and it would work. This change checks for the path being patched and if it actually is a git repository. If the package is not a git repository, it does not attempt a git apply at all, but falls back to patch, which works perfectly.