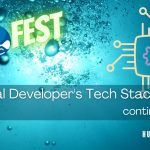 Just as I published yesterday’s article on the tech stack, I realized that I missed a few important things. I had said that the list was only a start, so I think it is fitting to continue it today. As such, today’s post won’t be as long as yesterday’s or even as long as my usual posts. I should also add a caveat that today’s post won’t make the list complete. With the industry how it is and the requirement of constantly learning, I don’t think such posts stand the test of time; not from a completeness perspective in any case.

Our target persona still remains the same as the last post. We are talking about a Drupal developer building sites and functionality for a complex Drupal website with rich content, workflows, editorial customizations, varying layouts, and more features typically found in a modern content-rich website. Since today’s post focuses on the fundamentals of working on the web, the skills may apply to more than a Drupal developer but we’ll focus on this persona for now.

These are also skills that are often hidden, aka non-functional requirements. It is very easy to forget about this (as was evidenced by my yesterday’s post) but this is probably the most important of any of the skills. Not understanding this sufficiently leads to significantly large problems. Fortunately, Drupal is a robust framework and system and is able to handle all such issues by default. It is still important to understand how to work along with Drupal.

Performance is a very interesting challenge for a large dynamic website. There are several layers to unravel here and the answer for poor performance could be at any of those layers. This means a developer needs to understand how the web works, how Drupal works, and how does Drupal attempt to optimize for performance.

It is shocking how many people are unable to clearly articulate how the Internet works. To me, the lack of clear articulation is a sign of gaps in understanding in the chain of all systems that make the Internet work. To begin with, understand what is the sequence of events that take place when someone visits a link. Understanding DNS is important too. I know no one really understands DNS fully but you don’t need that. Get familiar with the interactions that take place between the client and the various systems such as DNS. Similarly, get familiar with CDN’s and other caching techniques that you can use.

Scalability is a different problem than performance but still very important to understand. Understand what are load balancers and how do they decide to route traffic. Also, understand how can you configure an application to work in such an environment. For this, you also have to understand the concept of state. Fortunately, PHP is already designed to be stateless and has a natural aptitude for such scalability (and serverless paradigm).

On the application front, understand how JavaScript and other assets can impact the rendering of your page. How would you find out if the front-end code is a bottleneck and if it is, what do you do about it? Same for back-end code. Understand how would you utilize caching at multiple layers to deliver performance to the user. Figure out what scenarios are better served with a reverse proxy cache like Varnish or an application cache such as Redis or memcached.

Accessibility is not an afterthought. Unless you are willing to review each line of code later, start with accessibility in mind from the first day. Again, Drupal meets many of the accessibility standards when you use the themes that ship with Drupal. The framework also supports many of the constructs that make writing accessible interfaces easier. Drupal 7 onwards has committed to meeting WCAG 2.0 and ATAG 2.0. Read the Drupal documentation to know more about how you, as a module developer, can write accessible code.

Again, security is not an afterthought and many people who treat it as such have a fair share of horror stories. And just like before, Drupal provides constructs that make it very easy to write secure code. With Drupal 8 and the introduction of Twig, it became significantly harder for developers to write insecure code. However, it is important to understand what Drupal does for security, otherwise, you will be fighting against the core to make your code work.

Again, these are vast topics but I am only beginning to introduce them here. Do follow the links above to specific Drupal documentation pages to understand the topic better.