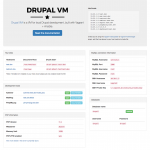 Vagrant 2.0 has just been released. Being who I am, I jumped at trying this out and testing if it worked well with my vagrant setup. I have entirely moved to DrupalVM since some time and wanted to see if it worked properly.

TL;DR, the DrupalVM part works fine, but there are other issues. I read the changelog to see what would break and the breaking change section only lists one change related to Ansible. Since DrupalVM is built with Ansible, I was not very sure but gave it a try anyway. Anyway, considering that it was only one breaking change, I thought the problems, if any, should be easily fixable.

I downloaded the MacOS build of Vagrant 2 and installed it normally. I confirmed the update by running vagrant version.

You're running an up-to-date version of Vagrant!

Okay, all good. I tried running vagrant plugin update and the problem appeared.

~/w/test > vagrant plugin update \Updating installed plugins...
Bundler, the underlying system Vagrant uses to install plugins,
reported an error. The error is shown below. These errors are usually
caused by misconfigured plugin installations or transient network
issues. The error from Bundler is:

I was a little concerned but ignored this for the time. I tried a vagrant plugin repair and it said it was successful, but didn’t fix the problem. Anyway, moving on…

I tried DrupalVM next. I used my setup-drupalvm script to quickly setup DrupalVM. I just had to change default.config.yml to remove vagrant-hostsupdater from automatic installation. (I prefer vagrant-hostmanager). Running vagrant up, and it all went through smoothly. There was only one change from the usual output I see on a fresh vagrant up (which is related to the breaking change I mentioned above):

Alternatively, the compatibility mode can be specified in your Vagrantfile:
https://www.vagrantup.com/docs/provisioning/ansible_common.html#compatibility_mode

After the machine was provisioned (which happened smoothly), I opened up dashboard.test.dev in my browser and everything looked perfect. 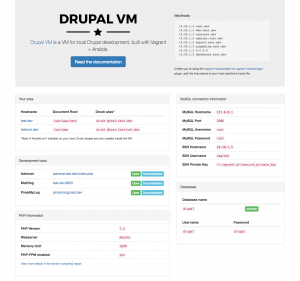 I cross-checked it with phpinfo() output and verified PHP 7.1.9 was installed and as FPM.

The only problem which now remains is to do with plugins and I am going to ignore it for now. Future versions of Vagrant might fix the version constraint that causes the problem. For now, the plugins themselves are working.

Please let me know in comments if there is a way I can fix the version constraint problem. I hope you found the post useful.