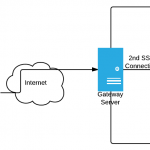 Recently at work, I came across a situation where the web server I needed to access (ssh) could only be accessed via another workstation. Considering that ssh is already quite secure, I didn’t see the point but I had to live with it. But I am inherently lazy, and I always look for ways to make my task easier. What worried me is that this situation is not common enough to be there a generic solution. But I started looking anyway and knowing that the closest thing to this is tunneling, I searched for ssh tunneling, and what do you know, it is there.

Unfortunately, the guides I found were not very clear on how to tweak the commands to my exact needs. I found it through simple trial and error and some reading of man pages. I am noting it down here for my reference (and yours).

What is SSH tunneling?

Consider the scenario above. You want to access one of the secured servers that are in a closed network. To help you connect, there is a gateway server that you can access normally, and then you can connect to the other servers through this gateway. This is what you would do:

You are now connected to the gateway server.
user:~$ ssh user2@secureserver

You are now connected to your intended secure server.

This is okay if you are accessing it once in a while, but it is painful to do it everyday. Further copying files and other common operations become a hassle and a huge waste of time. This is where SSH tunneling comes in.

Get it to work

Actually, all ssh does is forward ports. We’ll forward one of our local ports to try and connect to the secure server’s port 22 (ssh) through the gateway. This is the command to set it up.

Enter the password when prompted (but you should really be using publickey authentication, anyway). After this, in another terminal, use this to connect to the secure server.

That’s it. You can now use ssh, scp, or any other command to directly talk to the secure server through the gateway. You only need to run the first command once and keep it running in a hidden terminal.

Lets break up these commands to understand whats going on:

Cool, what else can I do with this?

So, you get your ssh tunnel working and now you can directly ssh to the secured server without worrying about the gateway. But there are other servers behind that gateway too! Should I create all those terminals or run ssh so many times?! Well, no.

Essentially, use the -L option as many times as you need. As long as they are behind the same gateway, you don’t need to worry.

Now, all you need to do is remember those long commands, to start the port forwarding (which creates the tunnel) and then connect! Well, there’s aliases for that.

You can save these aliases to ~/.bash_rc or ~/.bash_aliases (preferred) to make them permanent.

You can also run the first ssh command in background by suffixing &. But it only works well if you have set up publickey authentication (which you should).

What if its not SSH?

The beauty of the whole thing is that this is not just about ssh. What the first command does is create a port forward, and thus can be used by anything else. Just use the correct port for the service you want to connect and launch the client on localhost and the port you specified. For instance, if you want to connect to a MySQL server, do this:

Now, your local port 2306 connects to the MySQL server on databaseserver. All you have to do is launch MySQL client on your own port 2306 and you see the databases on the other end! But wait, there is a caveat (at least in case of MySQL).

You could use something like this to connect to the MySQL server on databaseserver.

As you might have guessed, the -P 2306 specifies that we have to connect to port 2306 instead of the default port. All fine, but this won’t work, at least not on Unix like systems. The problem is that MySQL programs treat the host name localhost specially on Unix like systems, in a way that is likely different from what you expect compared to other network-based programs. This occurs even if you specify the port with -P. To ensure that the client makes a TCP/IP based connection, use the host option to specify 127.0.0.1, or use the --protocol=TCP option. This is the correct command to use MySQL over a SSH tunnel.

It goes without saying that this command won’t work if your gateway can’t access the MySQL server on the databaseserver. To verify, ssh to your gateway normally and try connecting to the mysql server from there. If you can’t, the SSH tunnel won’t work either.

I hope this has been useful. Do leave comments and share.