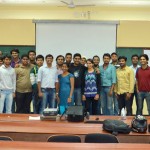 After the announcement of DrupalCon in India, various communities here are increasing efforts to strengthen themselves. Delhi and Mumbai already see regular camps and Bangalore is not far behind. The Bangalore Drupal community already conducts a monthly meetup and is now working to fulfil the long held plan of Drupal Camp in Bangalore. 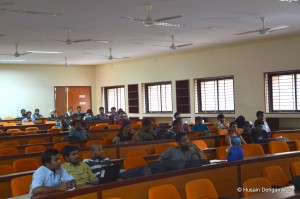 As a precursor to the full fledged camp, we organized a minicamp on Nov 29, 2014. There was limited time to plan as this was the last convenient date for the attendees. If we missed the date, we would have to wait months to find a workable date. We went ahead with full steam, started a call for presentations, and pushed the minicamp through various social media channels in the best way we could. IEEE young professionals helped us promote the event and PES University kindly offered us the use of their seminar hall and a lab for training. The lunch, and other incidentals were generously sponsored by Axelerant and Azri Solutions. 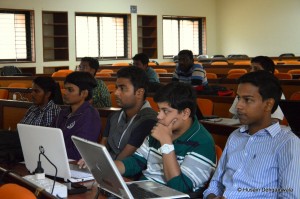 We were cautiously realistic about the turnout considering it was the weekend before exams and very short notice (just 10 days). We saw only about half of those registered, which is not a bad percentage for free events. It was even more heartening considering we only had a limited time to promote it. 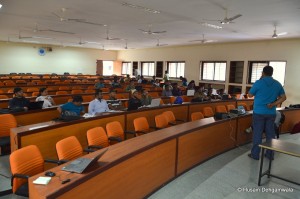 We started the day with a quick introduction about us – the Bangalore Drupal community and what we do. This was followed by an introduction to “Drupal in a day” training by Vishnu. This was followed by a short break with refreshments. After this, the crowd broke into two parts. People who were interested to learn Drupal went to a different room for the hands-on training and others remained in the seminar hall for a presentation on “Drupal 8 features” by Karthik Kumar Bodu from Axelerant. Karthik covered various features coming up in Drupal 8 with a short demo. This was followed by a presentation on “Headless Drupal” by Safwan. Safwan demonstrated using AngularJS with Drupal 7 and Drupal 8 to build headless Drupal websites. Everyone broke for lunch at 1 PM. 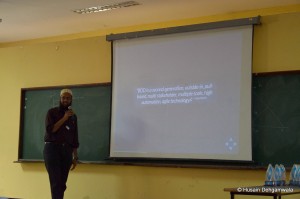 Everyone gathered in the seminar hall by 2:15 PM for a presentation on Real time web using Node.js by Rajesh. After this, Gokul spoke about Caching in Drupal and performance covering various aspects of performance in a typical Drupal application. The last session of the day was on “BDD with Behat” where Hussain (that’s me) covered concepts of Behavior Driven Development and automated testing of a Drupal website using BehatRunner. 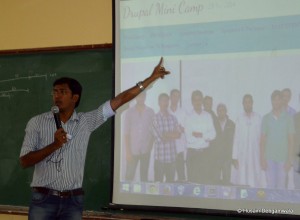 The minicamp closed at about 4:15 PM with a final note from Chakrapani and a note of thanks. Overall, it was a satisfactory turnout and we are happy we have things rolling again. Kudos to all the organizers and presenters for making this an awesome day. Next, we have a Drupal 8 Module Upgrade Code Sprint on Dec 20, 2014. See you there!