Understanding overridden configuration in Drupal The month of DrupalFest 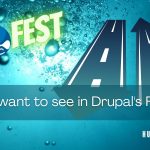 What I want to see in Drupal’s Future

This DrupalFest series of posts is about to end and I thought that a fitting end would be to talk about the future of Drupal. I have already written a bit about this in my previous post: what I want to see in Drupal 10. However, this post is more aspirational and even dream-like. Some of these may sound really far-fetched and it may not even be clear how to get there. For the purposes of this post, that’s fine. I will not only worry about the how; just the what.

Drupal is already modular; in fact, it is rather well designed. As Drupal grows and adds new features, the boundaries need to be redefined. The boundaries that made sense years ago for a set of features may need to be different today. The challenge is in maintaining backwards compatibility for the existing code ecosystem around Drupal. It also means fundamentally rethinking what are Drupal’s constructs. The transition from Drupal 7 to 8 was iterative and in many cases, the systems were just replaced from procedural to object-oriented. We need to rethink this. We should not be afraid to use the newest trends in programming and features from PHP, and rethink what architecture makes sense.

If you’re thinking this sounds too much like rewriting Drupal, you’re right. And maybe the time isn’t right for that, yet. I do believe there will be a time when this will become important. This will also help with testability which was the topic of my previous post about Drupal 10.

Once we have code that’s modular, we can break it off into packages that can be reused widely. This is already in minds of several core developers and the reason why you see the Drupal\Component namespace. I want to see more systems being moved out not just in a different namespace but in different packages entirely.

The direct upshot of this is that you can use Drupal’s API (or close to it) in other PHP frameworks and applications. But that is not my main interest here. My interest in seeing this happen is that forcing the code to be broken this way will result in extremely simple and replaceable code. It will also result in highly understandable and discoverable code and that is what I want. Drupal core is opaque to most people except those who directly contribute to it or to some of the complex contrib modules. I believe that it doesn’t have to be and I wish we get there soon.

Taking this even further, I would like to see some way to break down Drupal’s functions over different servers. I am thinking there could be a server dedicated to authentication and another for content storage. This is a niche use case and therefore a challenge to implement in a general-purpose CMS such as Drupal. This would need kernels that can run in a stateless way and also breaking systems so that they can be run independently using their own kernels. The challenge is that all of this will have to be done in a way that won’t increase the complexity of the existing runtime. This, as you might have guessed, is contradictory.

I might not have thought about this sometime back. But with a renewed interest in the editor and site-builder, I think it makes sense to improve the theme offerings available to Drupal. There were many times when I build powerful functionalities but then show them in a completely unimpressive look. Olivero and Claro are big steps in this direction and I am hoping for more of the same quality. If there were, I wouldn’t have used Contrib Tracker for over 3 years with the stock bootstrap theme (even the logo was from the theme until recently).

Drupal is great at structured content but I see Drupal used more and more for unstructured pages. The way we do this now is using structured bases such as paragraphs to represent components but this method has its shortcomings. Paragraphs and similar concepts quickly get too complicated for the editor. Editing such pages is very painful and managing multiple pages with such content is tricky.

We now have the Layout Builder that is a step forward in addressing this problem. The ecosystem around the Layout Builder modules is scattered right now, in my perception, and I would love to see where the pieces land (pun intended). I would like to see Drupal fundamentally recognize these pages as separate from structured data so that the editing workflows can be separate as well. More in the next section.

I know media is a lot better today than it was before but there’s still a long way to go. When working with pages (not structured content), I would like a filtered editing experience that lets me focus on writing. WordPress does this part well, but WordPress has a specific target audience because of which it can make this decision. This is the reason I previously said I would want Drupal to treat unstructured pages differently.

With a more focused editor experience, I would want better media handling as well. I want to paste images directly into the editor without worrying about generating resized versions. I also want pasted images to be handled somewhat similarly to the current media elements so that we can still deduce some structure. Even tiny things like expanding tweets inline and formatting code correctly could be supported in the editor and that could make a big difference.

We need ways to spin up sites for varied purposes quickly but I don’t think distributions are a good answer, at least not the way they are implemented right now. Once you install a distribution, you are stuck with it and would have to rely on distribution maintainers for updates. I think that’s a waste of effort. I know it’s possible to update parts of distribution without waiting for a release but the process is harder. And if a distribution is going out of support, it is difficult to remove it; it is almost impossible if the distribution authors don’t design for it. We already have challenges with migrations and upgrades, why add the distribution on top of that?

Instead, I would like to see some support for starter kits within Drupal core. Instead of distributions, you would install Drupal from a starter kit which would point to modules and contain configuration. Once installed, it would be as if the site was installed manually. I believe a lot of such solutions are also possible outside Drupal core (using drush, for instance) but it would be nice to have some sort of official interface within the core.

I know that all of the things I mentioned are possible in part or have challenges that involve tradeoffs. It’s not easy to figure out which tradeoffs we should make considering that Drupal’s user base is massive. For example, what I wrote about today are my wishlist items for Drupal. They may be something completely different for you and that’s okay. I believe the above are already aligned with the vision set for Drupal by Dries and the core team (ambitious experiences, editor-first, site-builder focused, etc). With that as the North Star, we should be able to find a way forward.

That is it for now. I can dream more about the removal of features (such as multisite) but that’s for some other day. Let me know what things you would like to see in Drupal.