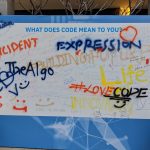 Bangalore has become a meetup scene with hundreds of meetups throughout the city (conferences too, but that’s a given). I have been to a polyglot meetup organised by IBM several times and was impressed that made an earnest effort to be a part of the open source and developer community. When I was invited to the IBM code day, I was immediately interested in attending it. The schedule looked awesome with tracks on data science, artificial intelligence, machine learning, etc. It was held at the Vivanta by Taj in Yeshwantpur which made the conference even more attractive.

I reached the venue at around 9 AM and there was already a small queue forming at the registration desk. There was also a desk where anyone could pick up stickers. These stickers were really plain looking but really cool in its own way. I found more stickers inside later on and picked up one of each. 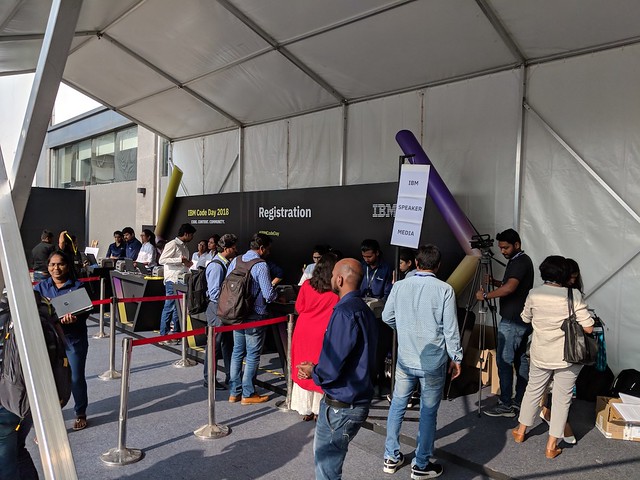 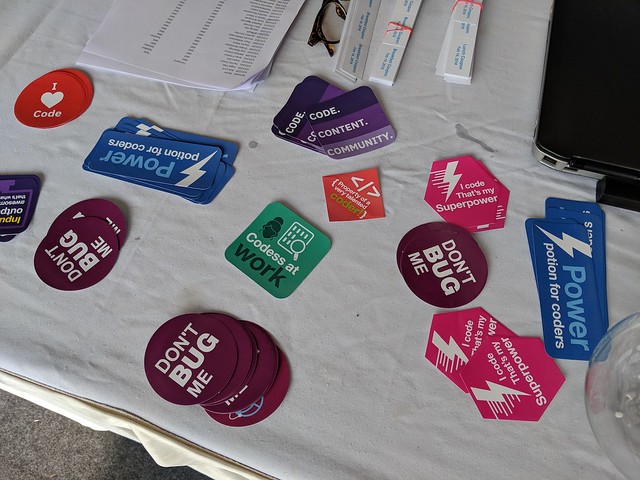 After a quick security check, we made our way to the hotel. As it was almost time for the conference to begin, we immediately went into the auditorium. As early as I was, I still found the auditorium completely full with only a few rows empty at the back. At 9:30 AM, Seema Kumar, the DEG Lead at IBM India, opened the conference and introduced IBM’s latest technology and culture to everyone. Did I mention this was held on Valentine’s day? Well, it was, and almost every speaker mentioned it on the stage. 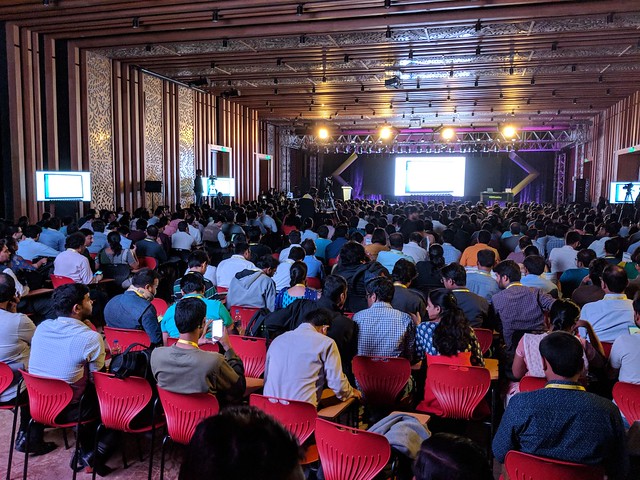 After this, Tanmay Bakshi, the “IBM Champion for Cloud”, took to the stage to talk about various cool things. Starting with writing a simple program for a quantum computer (yes, IBM has a quantum computer on the cloud already), Tanmay amazed everyone with his knowledge of quantum computing, deep learning, and the technology landscape in general. He also presented cool demos for each of the above; demos, which I have caught on video and you can watch it below.

After writing a simple program for the quantum computer, Tanmay showed how we could use IBM’s community pages to quickly create an image recognition tool with a readily available Jupyter notebook using Watson APIs. With a very minimal training set, Watson is immediately able to classify images as houses with pool with reasonable confidence.

As of this was not impressive enough, Tanmay went on to demonstrate how Watson could also be used to label streams of data (such as video) with minimal training and retraining. This example used a parking lot of cars and people image where we would just provide training on few frames and this would be used to identify cars and people in live streams of video. Again, the video is available below for your convenience.

After all these demos, someone would have thought that Tanmay is a hard act to follow. But they would be wrong. Nikhil Kumar, a fellow at iSpirit, took to the stage and explained the India Stack. There were some really cool insights about India’s data consumption. Did you know that the average Indian consumes about 18 GB per day (way ahead of the average American consuming about 3 GB)? Did you know that more Indians have access to mobile data than to a toilet? Did you know someone could use biometric authentication to transfer money? We found out about all these and many more cool facts about India and how the data adoption is transforming lives. 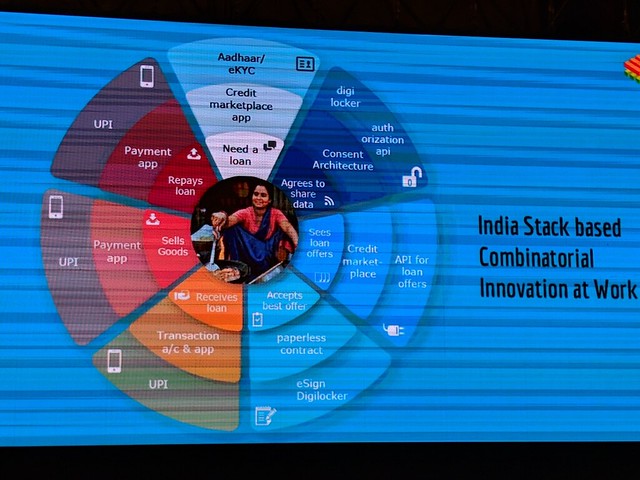 Nikhil was followed by David Kenny, SVP of IBM Watson & Cloud Platform, explained how IBM’s Watson and cloud help developers in everything related to cloud, machine learning, artificial intelligence, transaction applications, and much more. There were no slides. There was just one diagram on the screen and that was enough to keep everyone hooked. 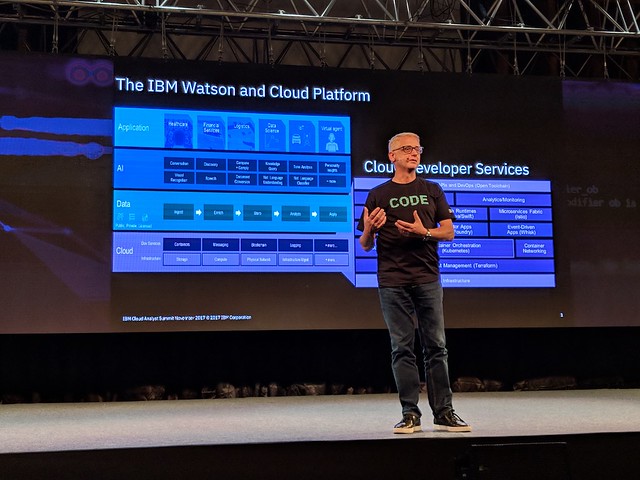 This was followed by a conversation between Bob Lord, Chief Digital Officer, and Atul Batra, CTO at Manthan. Bob asked Atul about how machine learning is used in the retail industry and how it helps. After an insightful conversation on various aspects of retail business such as inventory, pricing, and more, Atul asked about Bob being a Chief Digital Officer, a designation usually present only at non-tech companies. 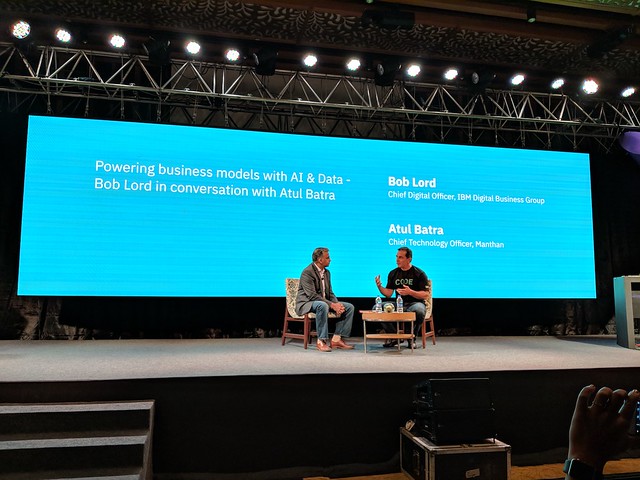 Now, it was time for cakes and watermelons and which has fewer calories! Dr Angel Diaz took to the stage and demonstrated Watson’s visual recognition APIs with a mobile app. This app could take a photo of a food item and show with reasonable confidence the number of calories in it. We tried this out with both a cake and a slice of watermelon. To no one’s surprise, the cake had fewer calories! Nah, I’m just kidding.

The recurring theme of the day was around Code – Content – Community. The funny thing is I could say the same about Drupal community. That’s a different topic though. I am really impressed at how seriously IBM is taking the community.

This was the end of keynote sessions and the room was split into three different tracks &mdash Data Science, AI, and Cloud. The first session I attended was on Watson ML-based predictive analysis. Gopikrishnan Varadarajulu explained how Watson’s rich user interface could be used by anyone with minimal knowledge about machine learning to configure a data source, clean data, and train models. Watson also provides an API to use the trained model that can be immediately consumed in an app. This session really makes Watson a very attractive option for building machine learning applications.

The first break-out session was followed by lunch and then more sessions. At the same time, there were seven code labs, certifications, and hands-on coding labs held at various locations at the venue. I took this time to go to various demo booths and all the tech they were demonstrating. I started off with finding out which Star Wars character’s lightsaber I’d use based on my tweets and their match with that character’s dialogues in the movie. I found out I am 70% similar to Yoda and I have a photo to prove it. 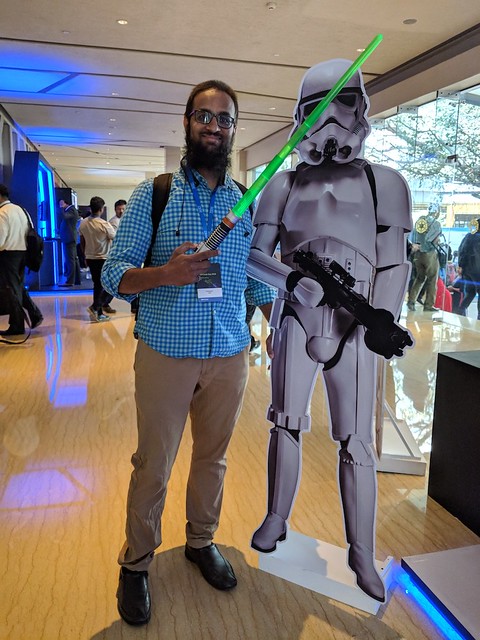 I played a Star Trek VR game, got my age guessed by the TJ bot, and controlled a BB-8 using my phone. Various people from IBM walked me through each of these technologies worked, what happened behind the scenes, and how I could do something similar. To inspire further, there were videos from really cool projects like Soul Machines. Here’s the video:

There were seven code labs covering a variety of topics related to cloud, machine learning, and artificial intelligence set up in the courtyard. Appropriately enough, the code labs sign was just next to a grand banyan tree symbolising enlightenment and wisdom. 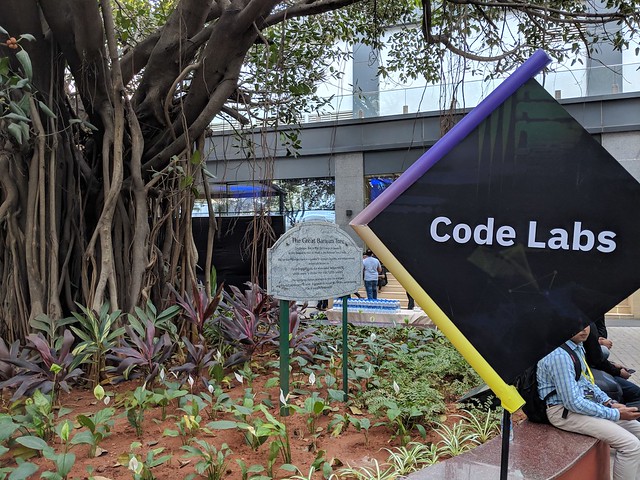 I went to a code lab which guided me to setup a WordPress cluster on IBM’s cloud using a few commands. I was given a laptop and a set of instructions which was enough for me to get my first Kubernetes cluster up and running on IBM cloud. There was a guide to answer all my questions regarding the configuration and various Kubernetes concepts. 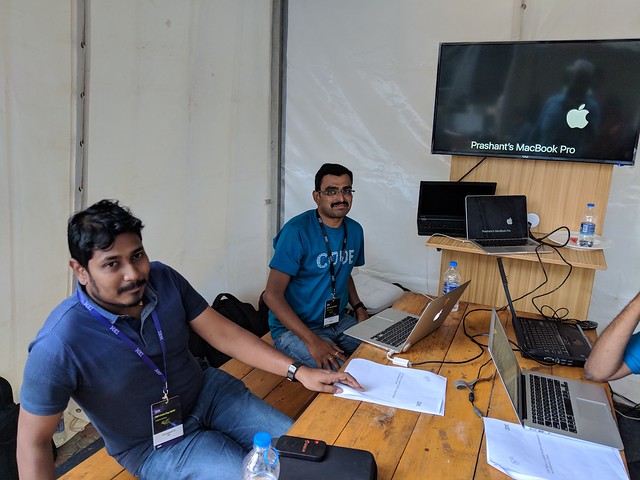 After the demos, code labs, keynotes, and individual sessions, I made my long commute home feeling satisfied with the day and thinking that it was worth traveling an hour in Bangalore traffic to get there, which is not something I feel often. The IBM Code Day was impressively organised and the content was excellent. At least, I learned a lot and will look forward even more to the next IBM event or meetup. 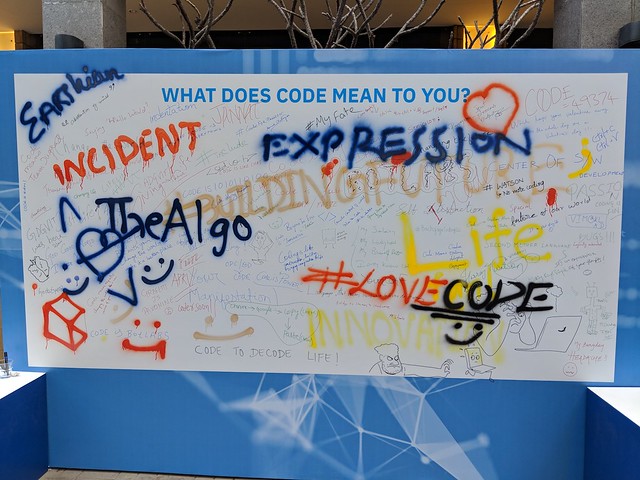