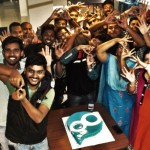 Drupal 8 is released and the world rejoiced! We at the Drupal Bangalore community, organized a release party on Saturday, two days after the release due to various reasons. One of the main reasons was that we wanted to make sure most could travel to the meetup which would have been very difficult on a weekday.

The party was an overall success with the support of 91SpringBoard, our coworking partners, and Axelerant, our sponsors for the event. The venue was easy to find given its prime location just next to the Forum mall in Koramangala. We had a lovely cake, delicious snacks, and lots of pizzas for everyone.

The event started at 9:50 AM with Gokul from Azri Solutions covering what’s new in Drupal 8 from the perspective of site builders. This was followed by Chakrapani from Azri Solutions covering multi-lingual improvements and other improvements for developers. Finally, I spoke about Drupal and it’s community in Bangalore, in India, and the world. I used the videos from CelebrateDrupal8.com website and it was very well received. Kudos to the entire team of CelebrateDrupal8.com for producing such a brilliant website.

This was followed by the cake cutting, snacks, and pizzas. The party ended shortly after 2 PM with clean-up and photos. All the photos are below just after the videos.

We later joined another Drupal 8 party later at Global Training Day organized by Valuebound. The audience was mostly from PHP background and it was a lot of fun interacting with them and explaining about PHP community’s recent initiative on getting off the island and Drupal’s commitment towards that initiative.

It was a long day but a lot of fun. Thanks to everyone – all the organizers, participants, and sponsors to make this event a grand success. Join the Drupal Bangalore meetup page to find out about our next meetup. You can also follow us on Twitter and Facebook.

Photos from the event